Investors may want to keep an eye on discount retailers, like Dollar General (DG).

For one, the latest pullback may be a great buy opportunity.

If you take a look at this chart, you’ll notice that Williams’ %R, Fast Stochastics, and RSI are all starting to pivot well off oversold conditions. With patience, I’d like to see the Dollar General stock retest $260 resistance, near-term from $241.65 support. 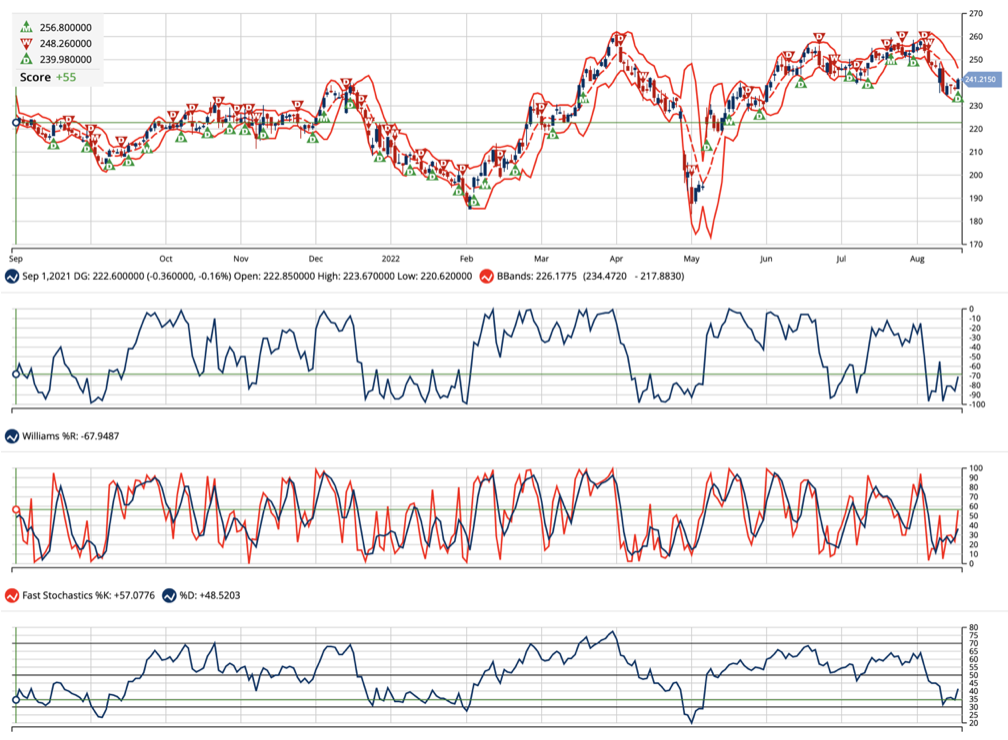 Two, while other major retailers take a hit with inflation, Dollar General is rising because of inflation. In fact, we can see that with the company’s recent earnings report.

Three, wealthier people are now shopping at dollar stores because of inflation.

According to Business Insider, Todd Vasos, CEO of Dollar General, said on a call with analysts that the store saw a rise in higher-income households shopping there, “which we believe reflects more consumers choosing Dollar General as they seek value.”

Plus, we have to realize consumers are “trying to make ends meet, and when you have limited funds in your wallet, the dollar stores provide the ability to do that,” added Joseph Feldman, a senior analyst at Telsey Advisory Group, as quoted by The New York Times.

In addition, analysts seem to like the DG stock, as well.

Guggenheim analyst John Heinbockel reiterated a buy on the stock. Piper Sandler raised its price target on DG to $273 from $265. Raymond James raised its target price to $285 from $160. Morgan Stanley raised its target to $270 from $250. Deutsche Bank says Dollar General is one of the few stable retailers.

Plus, Dollar General will also pay a dividend shortly.

All things considered, investors may want to use recent DG weakness as an opportunity.

The above analysis of Dollar General (DG) was provided by financial writer Ian Cooper. Ian Cooper is not a Registered Investment Advisor or Financial Planner. This writing is for informational purposes only. It does not constitute an offer to sell, a solicitation to buy, or a recommendation regarding any securities transaction. The information contained in this writing should not be construed as financial or investment advice on any subject matter. Ian Cooper expressly disclaims all liability in respect to actions taken based on any or all of the information on this writing.

Get The Next Signal for DG

What’s the long-term outlook for Dollar General (DG)? Will the stock follow its overarching trend or make a quick reversal?

Get your free trend analysis for DG with a momentum rating, new signals, and long-term outlook.

Magnifi Communities does not endorse this website, its sponsor, or any of the policies, activities, products, or services offered on the site. We are not responsible for the content or availability of linked site.

Take Me To Magnifi