Look at Bitcoin, for example. After crashing to a low of $19,097, BTC is now back up to $22,960. Not only is that great news for cryptocurrencies, it’s a strong catalyst for mining stocks, like Marathon Digital Holdings (MARA).

After all, miners rise and fall with the price of Bitcoin.

Technically, MARA just broke above double top resistance dating back to late May 2022. Now, from a current price of $11.48, we could see a potential bearish gap refill around $16 a share. If Bitcoin can continue to recover, MARA could even retest $30 at some point.

Granted, there are some red flags…

Not only is MARA at its upper Bollinger Band, it’s also over-extended on Williams’ %R, Fast Stochastics, and on Relative Strength. So, there is some concern. However, if Bitcoin can continue to push higher, MARA is sure to follow. 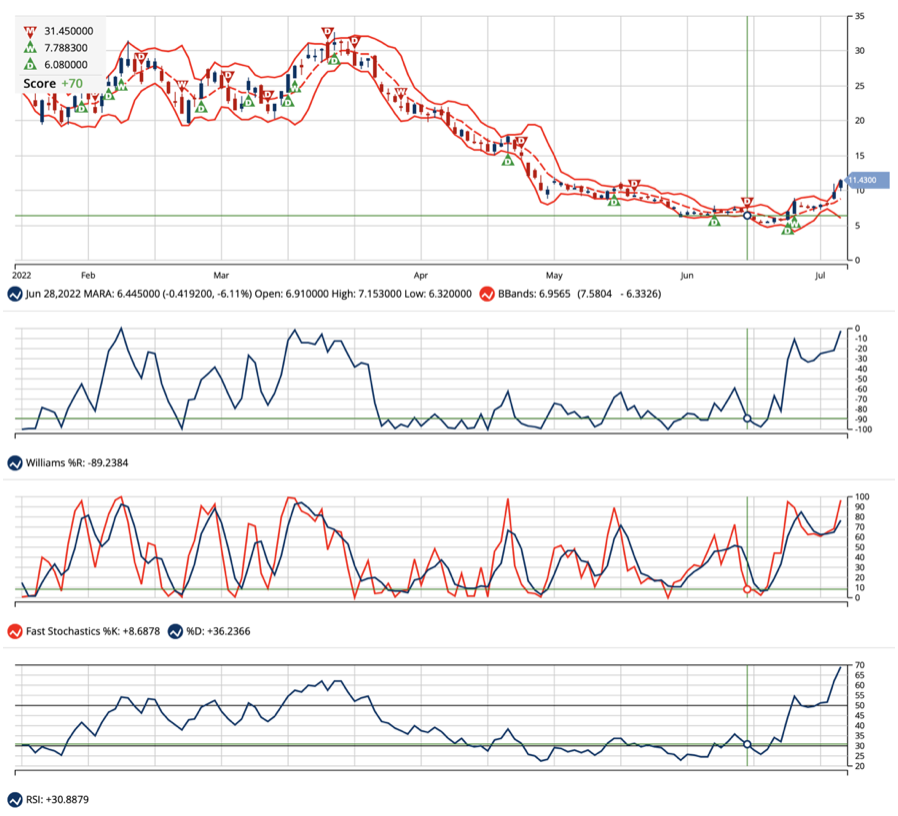 Helping, BTIG analyst Mark Palmer believes Bitcoin could quadruple from current prices to $95,000 by 2023, as noted by U Today.

Changpeng Zhao, the CEO of Binance believes Bitcoin could rally to $70,000 in “a few months or years,” he said, as quoted by The Guardian.

Even the CEO of MicroStrategy, Michael Saylor has been buying weakness in Bitcoin, too.

Fundamentally, there’s a lot to like about MARA, as well.

In the second quarter of 2022, the company produced 707 self-mined Bitcoin, an 8% increase year over year from 654 bitcoin mined in Q2 2021. Year-to-date Marathon Digital produced 1,966 Bitcoin, a 132% increase year over year. In addition, the total number of miners installed and awaiting energization at Texas facilities increased to 29,640 miners.

With that, Marathon “secured approximately 254 megawatts of new hosting arrangements for its Bitcoin mining operations, with an option to increase to 324 megawatts, from a variety of hosting providers. Marathon believes it has now secured ample hosting arrangements to support the Company’s previously stated goal of approximately 23.3 exahashes per second of computing power for Bitcoin mining,” as noted in a company press release.

That’s big news for MARA, and signals that the company will survive the rout.

The above analysis of Marathon Digital Holdings (MARA) was provided by financial writer Ian Cooper. Ian Cooper is not a Registered Investment Advisor or Financial Planner. This writing is for informational purposes only. It does not constitute an offer to sell, a solicitation to buy, or a recommendation regarding any securities transaction. The information contained in this writing should not be construed as financial or investment advice on any subject matter. Ian Cooper expressly disclaims all liability in respect to actions taken based on any or all of the information on this writing.

Get The Next Signal for MARA

What’s the long-term outlook for Marathon Digital Holdings (MARA)? Will the stock follow its overarching trend or make a quick reversal?

Get your free trend analysis for MARA with a momentum rating, new signals, and long-term outlook.