For one, Russia said it would cut natural gas shipments to Europe.

In fact, as noted by Barron’s, “Russian company Gazprom said on Monday that it will cut natural gas shipments from the key Nord Stream pipeline to Germany starting this week. The pipeline’s exports will be cut to 20% of capacity, down from 40%, because of a sanctions-related issue with turbines serving the pipeline.”

Two, there are drought conditions in the U.S., and a heat wave forcing millions to turn up their air conditioners to full blast.

Three, according to EQT CEO Toby Rice, as quoted by Barron’s, “In the United States, we’ve got the natural gas here, we’ll be fine. But you think about our allies in Europe, and the tremendous power and influence that Russia has on these countries. Clearly, we need to take away the gun, and provide the energy to our allies around the world.”

All could create a big opportunity for natural gas stocks, like Tellurian (TELL).

Better, the company could benefit from a substantial shortage of natural gas.

In fact, according to its latest investor deck, geopolitics and energy security providing a step change in global LNG demand. Tellurian notes there’s (1) underinvestment in energy and post-CV structural growth have collided with a geopolitical crisis; (2) A need to replace 20 Bcf/d of Russian gas to Europe, equivalent to ~35% of the world’s LNG market; (3) Natural gas shortage expected to lead to catastrophic consequences.

Technically, according to MarketClub, shares of TELL are slightly overbought. The MarketClub Smart Scan also gives the stock a score of +60, which tells us at the moment, the stock is struggling to move in a solid trend.

However, with natural gas prices showing no signs of cooling off, I’d like to see the stock run from a current price of $3.68 to $5, near-term. 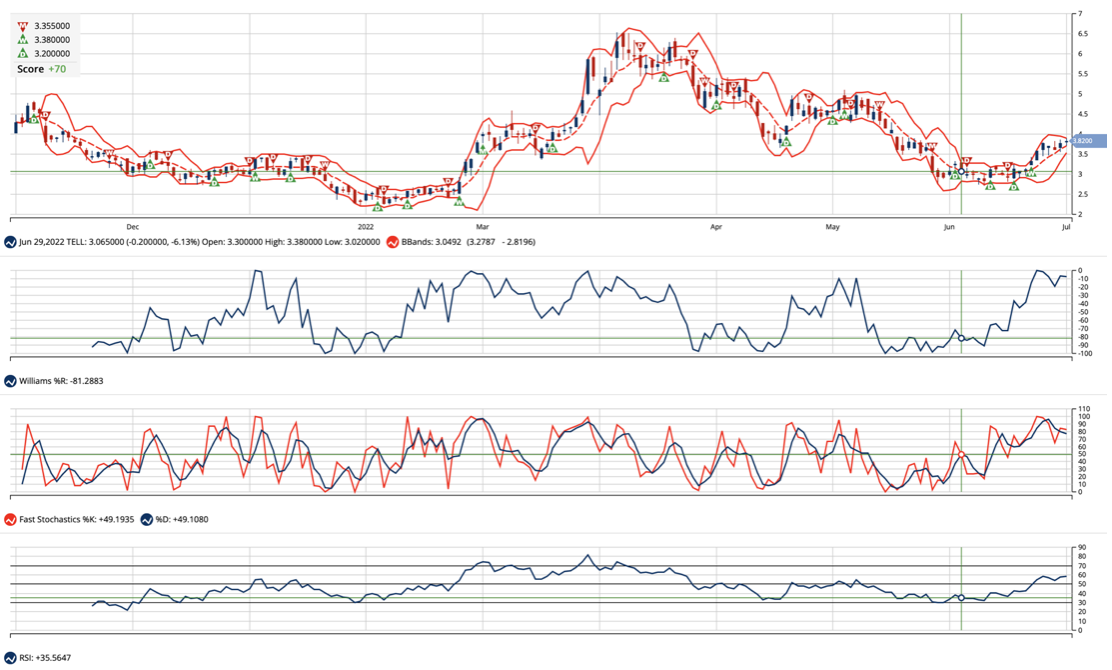 The above analysis of Tellurian (TELL) was provided by financial writer Ian Cooper. Ian Cooper is not a Registered Investment Advisor or Financial Planner. This writing is for informational purposes only. It does not constitute an offer to sell, a solicitation to buy, or a recommendation regarding any securities transaction. The information contained in this writing should not be construed as financial or investment advice on any subject matter. Ian Cooper expressly disclaims all liability in respect to actions taken based on any or all of the information on this writing.

Get The Next Signal for TELL

What’s the long-term outlook for Tellurian (TELL)? Will the stock follow its overarching trend or make a quick reversal?

Get your free trend analysis for TELL with a momentum rating, new signals, and long-term outlook.